- before it was excavated.

The circle was erected (probably by the same 'ethnocultural group' who erected the circle at Ballynoe)
after the tomb was built, perhaps to incorporate it into a new form of sanctity,
as old churches in Ireland were taken over from the Celtic rite first by the Roman orthodoxy,
then later by the Anglicans. 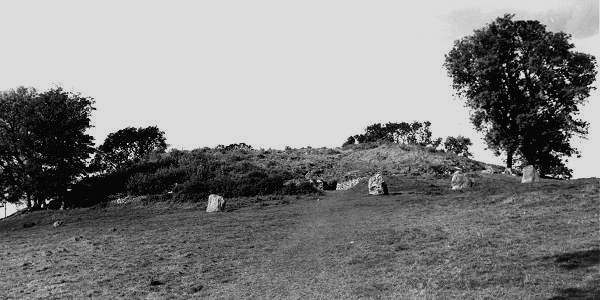 A slightly-later view of the entrance before it was "restored". 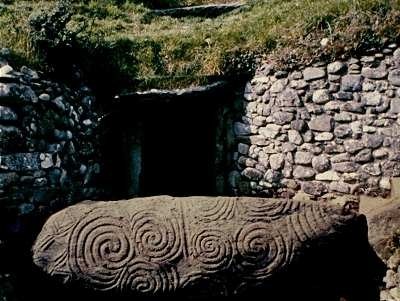 The "restored" (Startrek) entrance under a starry sky, photographed by Ken Williams.

"It's sacrilege what they've done to Newgrange.
It takes an effort of imagination to envision the original nature and the spirit of the place, underneath all that encrustation.
Who in their right mind would conceive of such a leaden, lifeless, artificial, cut-and-chopped structure?
It looks like a huge, heavy, moulded oat-cake, whacked down onto the ground. "

- feedback to this site from M. Heywood, Canada, September 2003.