Ballynoe, county Down - seen from the North-east


Two slightly-different views of the very large circle of over 50 stones up to 1.8 metres high - though mostly smaller.
They enclose a space about 35 metres across - thought to have been built as a counterpart
to the beautiful and contemporaneous circle at Swinside in Cumbria some 190 km due E.

In the E half of the circle is a long low mound which contained large kists at the E and W ends.
This mound obliterated two shortlived cairns built after the circle was constructed,
in what Aubrey Burl describes as "prehistoric bigotry and vandalism [which] ruined this magnificent monument."
Three pairs of stones stand just outside the circle at varying distances,
the small pair at the W side forming a kind of entrance-portal 2.1 metres wide.
Many of the stones in this circle were originally shoulder to shoulder, as at Lough Gur, at Swinside in Cumbria, and La Menec in Brittany.

The purpose of the several outliers (one of which is in the foreground of this photograph) remains enigmatic.
They seem significant and semi-random at the same time.

For other enigmas of this intriguing circle, click on the pictures. 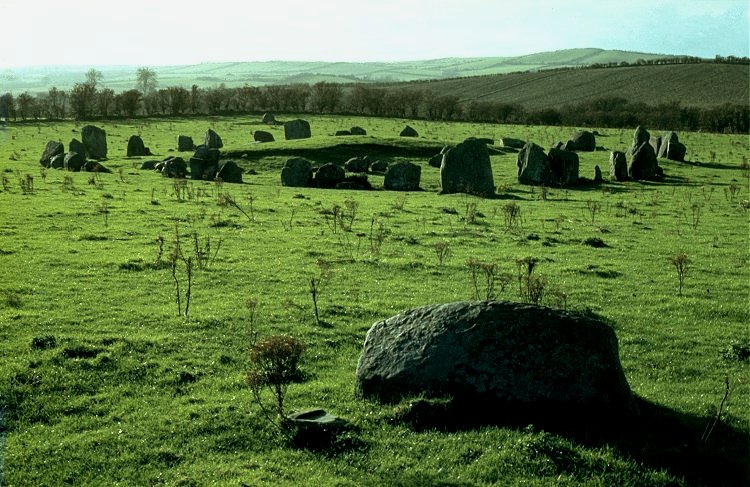 Click here to compare the circle at Swinside in Cumbria.