A remarkable and massive menhir, which seems largely natural, can hardly be missed by the roadside,
to the N of the D.20 between Roumégoux and Sousceyrac. 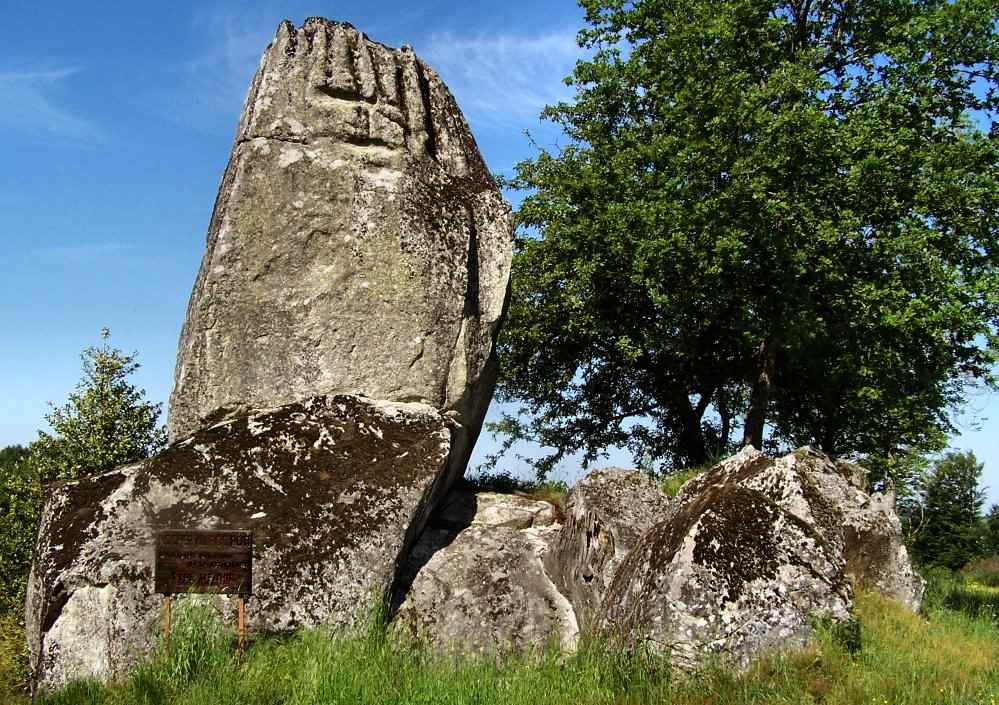 The iron cross on the top has been edited out of this photo. The sign reads:
Rocher du Roc Rôti,
monument mégalithe de la Préhistoire
TYPE MENHIR.

(Rôti is obviously a corruption - of grossi, érodé.. ?) 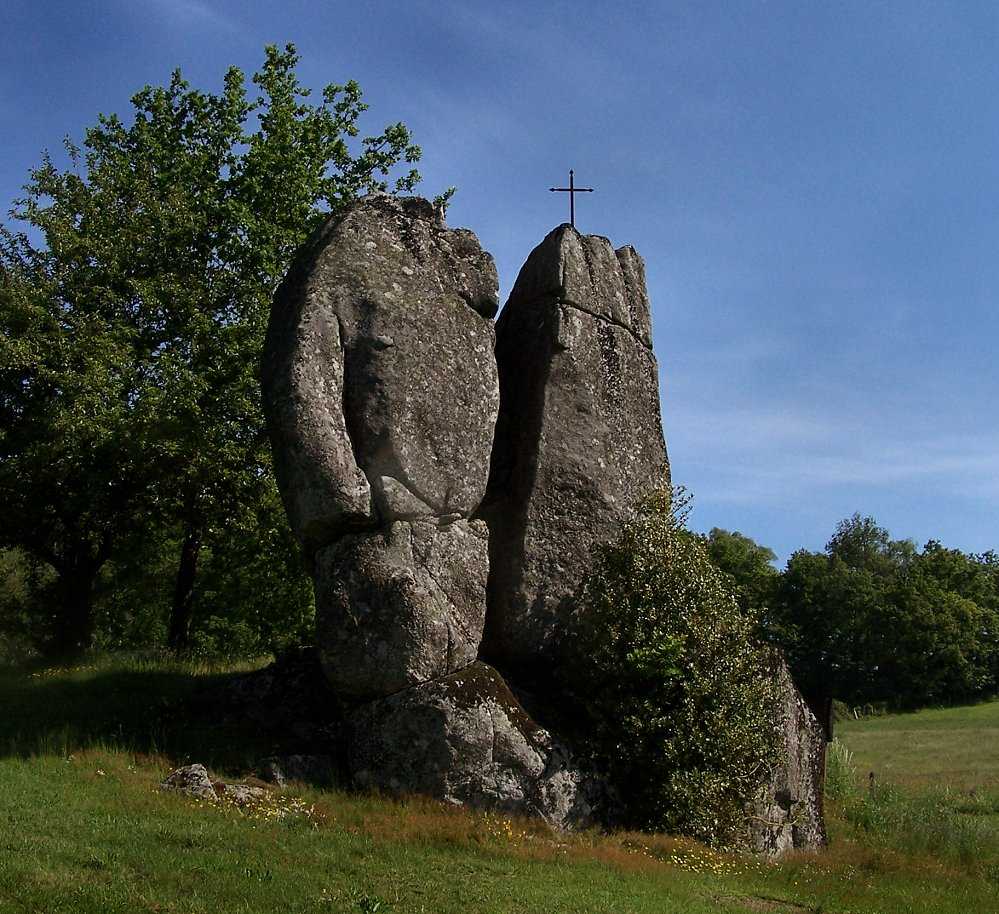 From the South, the monument recalls the male and female menhirs of Ireland - on a much larger scale.
It is at least five metres high.

The grooves on the 'female' side recall the grooved granite stones of county Carlow in Ireland, and some in Brittany.

If the cross on top of the Roc Rôti seems intrusive, a menhir in the commune of Saint-Simon a few kilometres NE of Aurillac
may hold the record for size if not for solidity. The cross is about the same length (2.80 metres) as the menhir,
and is just one of hundreds of examples of Catholic fanaticism which raged in France towards the end of the 19th century. 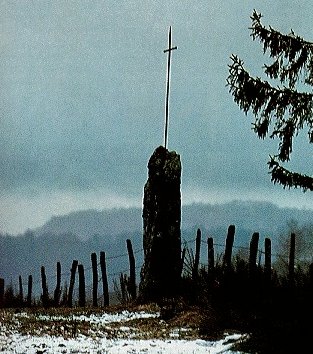 To the SW of the Roc Rôti, in the same SW corner of the département, near Calvinet, is one of the rare stone circles of France.
It is on private property, and only the most dedicated of megalithomaniacs should attempt to visit it -
or else rent the gîte very close to it on the same property.

It is a complicated megalith, which seems, like Ballynoe Stone Circle in NE Ireland, likely to have been wrecked
a long time ago. Like Ballynoe (it, too, anomalous) , it has outliers. Unlike Ballynoe, however, all the stones are of granite,
the largest being over 2 metres high, and it is on a raised platform, with some of the (assumed) outliers downhill.
It is also much smaller in diameter than Ballynoe (or the nearest French circles on the Causse de Blandas)
as you can see from the first picture below. 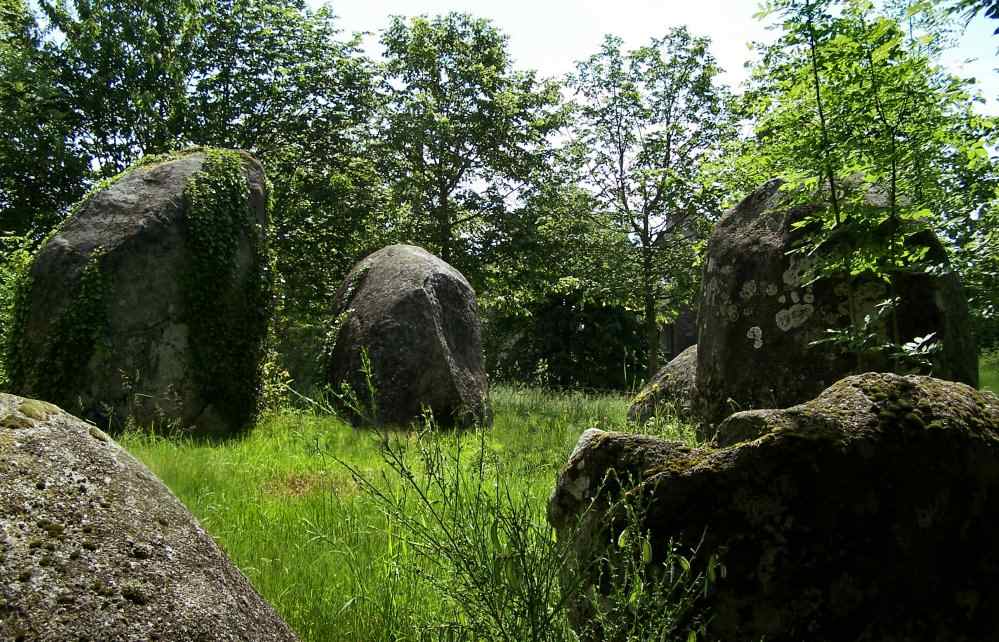 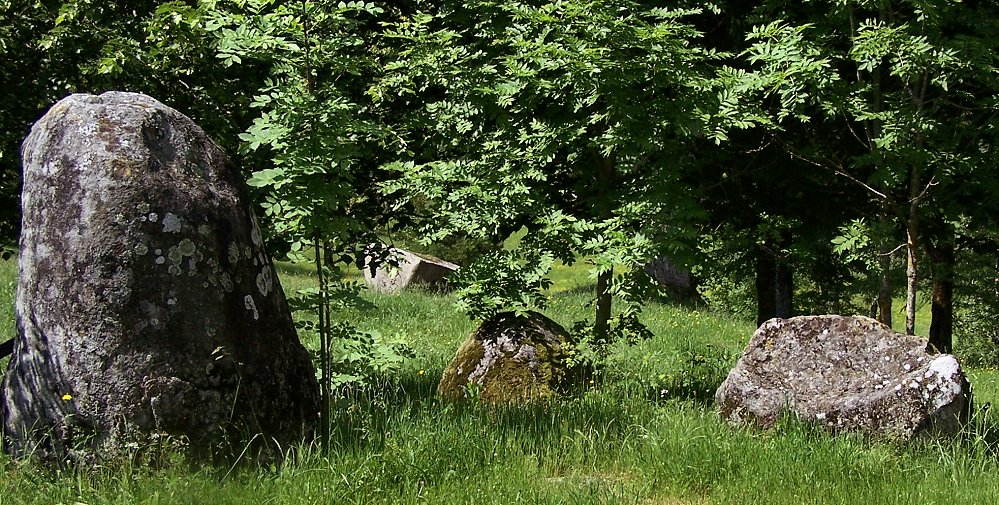 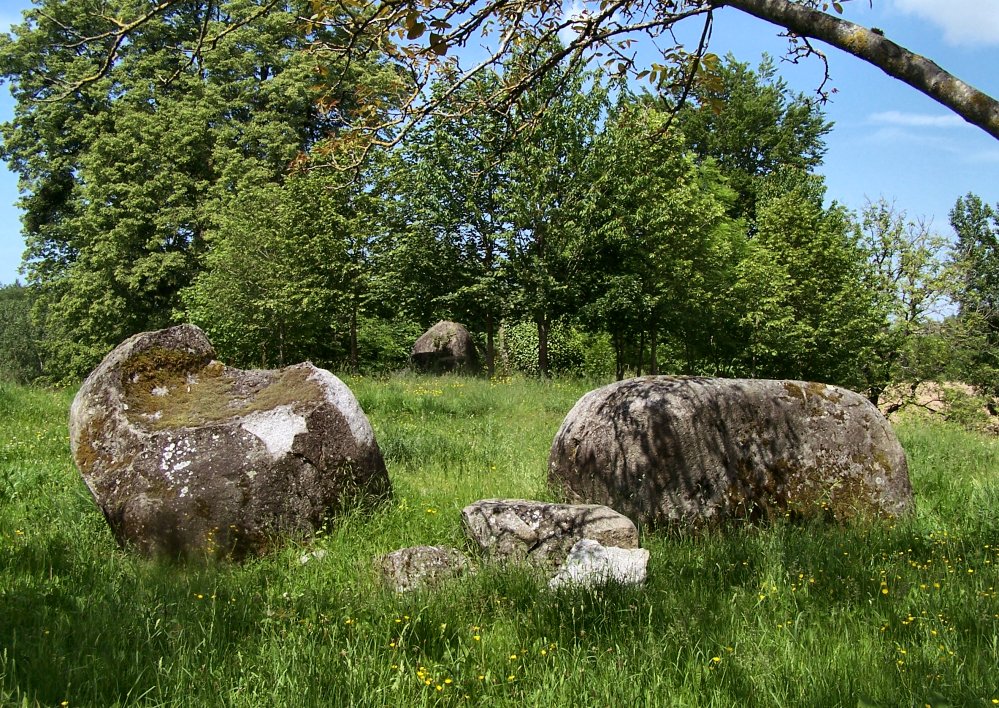 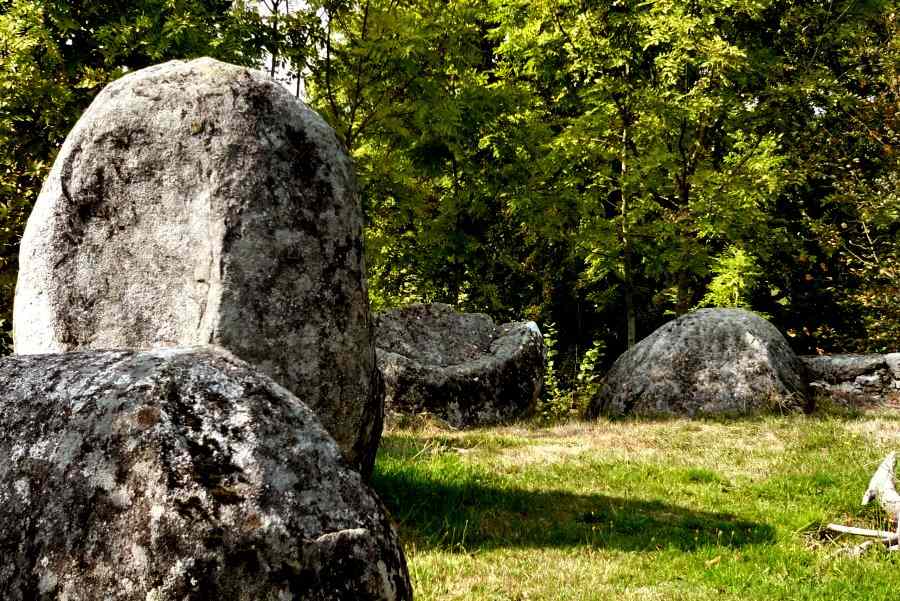 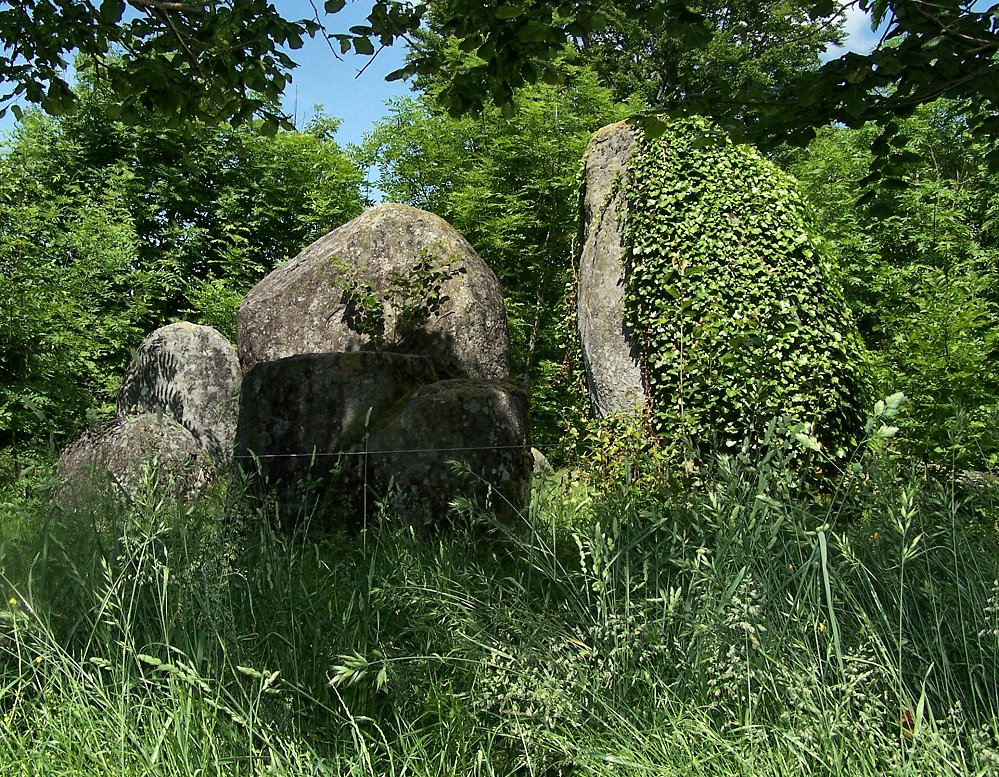 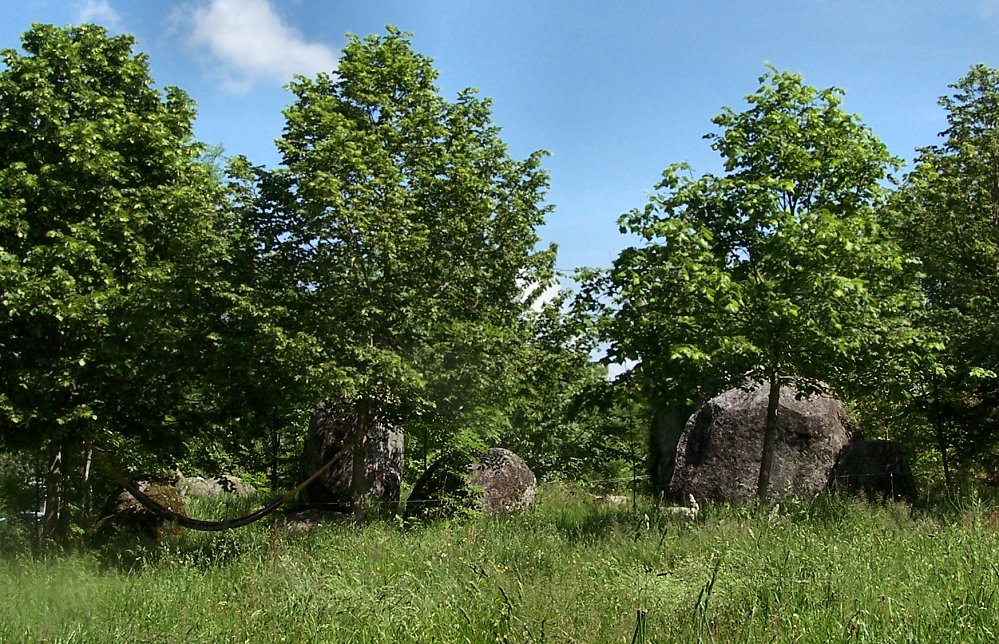 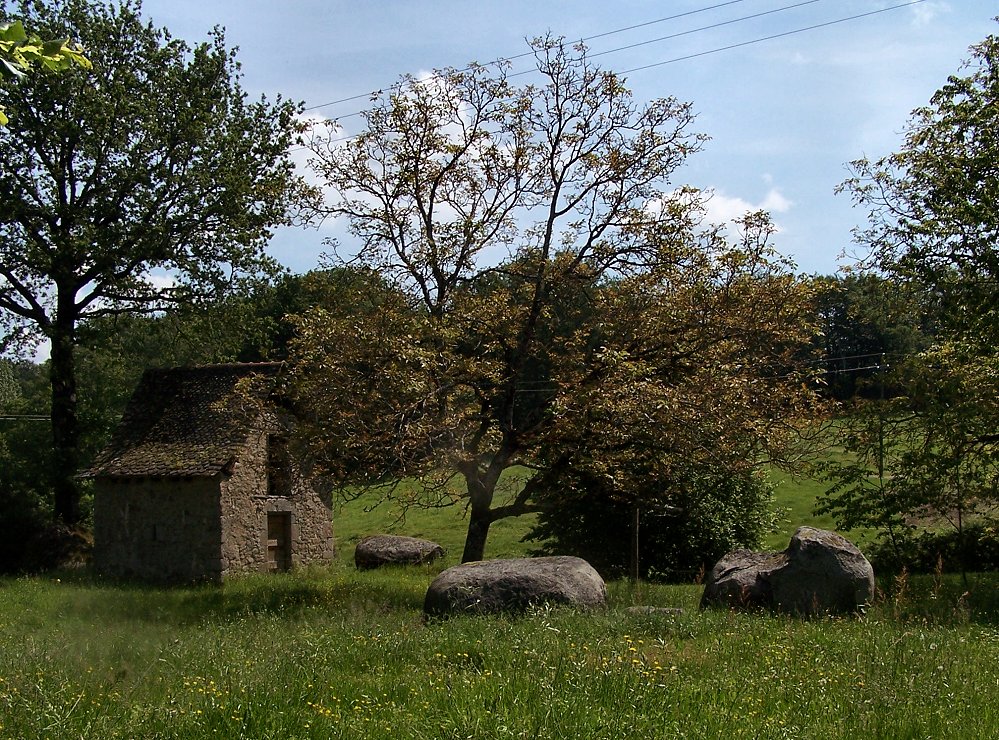 The little building is a chestnut-drying store. The picture below comes from the website of the gîte rural. 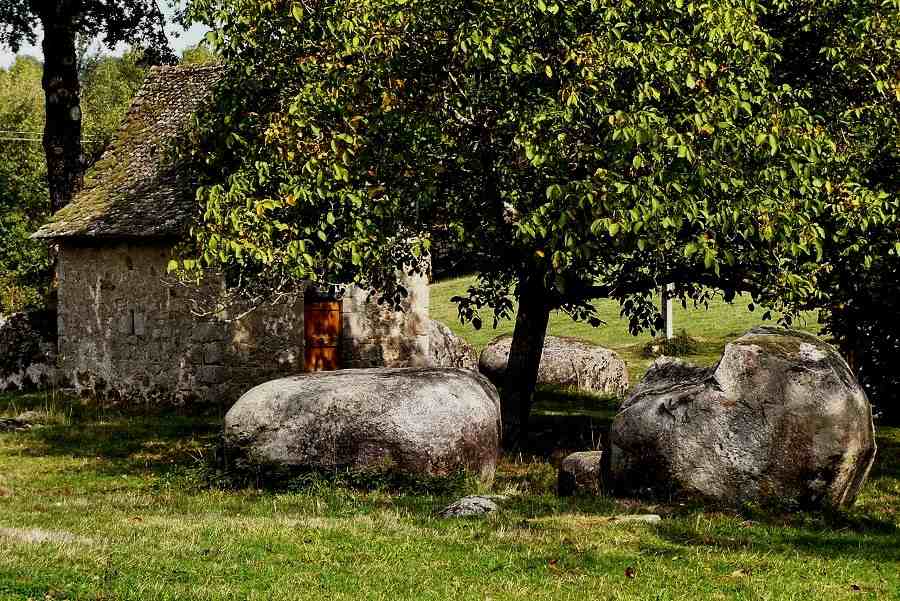 The view on Google Earth. 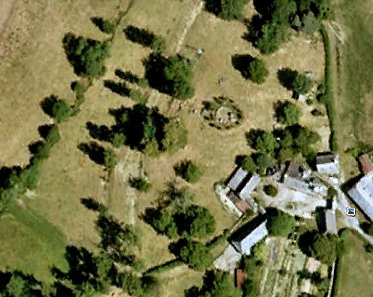