This unusual tomb has a large door-slab in which is a "kennel-hole" entrance,
reminiscent of some in prehistoric tombs the départements of Hérault and Aude in southern France.
Note the remains of corbelling (overlapping stones) which supported the fallen roof-slabs.
The hole does not seem to be artificial, but that does not mean that it was not a perhaps-serendipitous choice.
The door-stone is very much like the septal slab of wedge-tombs, and the gallery has just one chamber
(like many a southern French dolmen), which makes the monument either hybrid or experimental in an area of much megalithic activity. 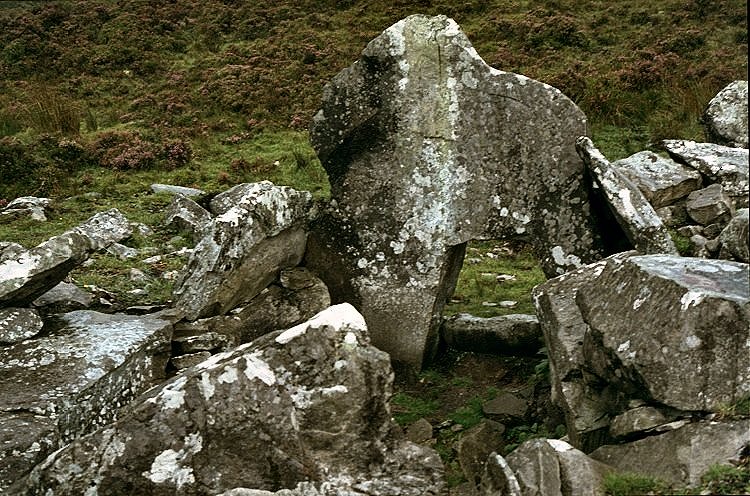 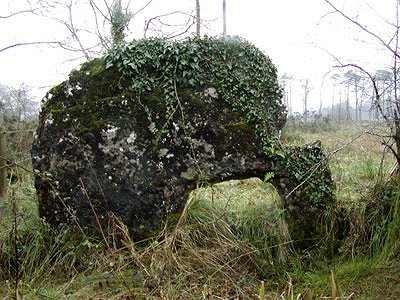 which is probably all that remains of a similar tomb.

The entire cairn seen from the West. Note the walling or revetment on the right.

Howard Goldbaum, of Voices from the Dawn, at the tomb in 2013.

The white arrow indicates a section of the Black Pig's Dyke, a post-prehistoric earthwork
which ran irregularly and intermittently from Lough Melvin in the West to the Cooley mountains in the East,
separating much of Ulster from the rest of the island.